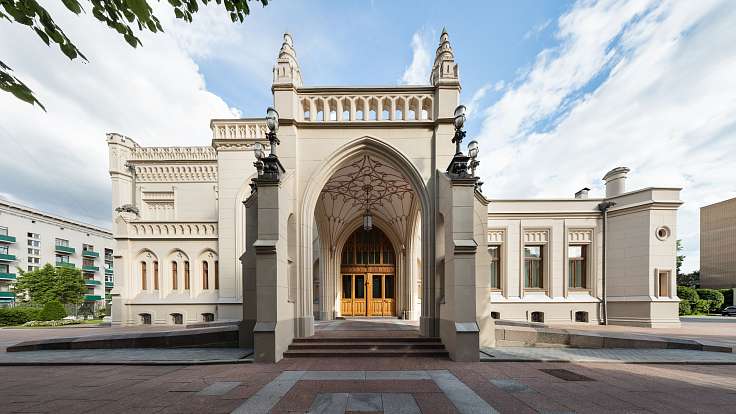 The Department of Major Construction of GlavUpDK under the MFA of Russia has completed the restoration of the façade of the Zinaida Morozova mansion at 17 Spiridonovka Street. Designed by Fyodor Schechtel, the mansion is a cultural heritage site of federal significance supervised by GlavUpDK. Today it is one of the symbols of Russian diplomacy abroad, hosting the Reception House of the Russian Foreign Ministry, which receives guests at the highest level.

In the history of the building, one of the most prominent cultural heritage sites in Moscow, this was the first such large-scale restoration of the façades. GlavUpDK, together with specialized organizations, worked on the mansion’s façades, roof, and fence.

The work began in late 2019 to thoroughly restore more than 60 percent of the surface of the entire façade. In particular, numerous decorative elements have been restored and reinforced: stained glass windows, gargoyles of spelter, and chimeras. The complex parapet decoration on the balcony, terraces, and machicolations of the main tower (donjon) on the east façade have been restored, together with the finials shaped as tiny castles.

The roofing material has been replaced by modern and durable zinc-titanium, which is ductile enough to preserve the roof’s sophisticated shape. "For the roof, we used not just galvanized metal, but an alloy of titanium-zinc, a material suitable for making durable and still sophisticated decorative roof elements. We decided to do this, because we realize that with quality installation the roof’s lifespan is about 30 years. The same is true of the other materials used," says Dmitry Drachev, Head of the Department of Major Construction, GlavUpDK under the MFA of Russia. The drainage system has also been recreated.

The mansion’s unique ensemble is completed with the restored fence along Spiridonovka Street and new architectural lighting, which spectacularly highlights the shapes and details of the building in the evening, staying almost invisible during the day.

The experts who took part in the restoration noted the highest quality of the mansion's construction and the good condition of the core structures and some of the materials used, such as high-quality concrete of the late 19th century.

The mansion was among the first big individual projects by architect Fyodor Schechtel. He not only designed the structure and sketches of the interior decoration - he prepared more than 600 drawings in just two months - but also organized the mansion construction works. The construction involved top-class masters, who used unique techniques to work with masonry, woodcarving, and reliefs. The result of the architect's work was an amazing synthesis of highly elaborate architecture and the use of fine art in the planning of the interiors.


Take a virtual tour of the mansion

GlavUpDK of the MFA of Russia, which in August 2021 celebrated its centennial, supervises over 130 mansions in Moscow, most of them being cultural heritage sites. Many of them accommodate foreign embassies.

Historical buildings are managed and operated in strict compliance with the Russian cultural heritage protection law under the supervision of the monument protection authorities.

Following the results of Moscow Restoration, a competition run by the Moscow Government for the best project in cultural heritage preservation and promotion, GlavUpDK was a repeated winner in the Best Management of Restoration Work category. In August 2014, GlavUpDK team received a letter of commendation from Mayor of Moscow Sergei Sobyanin for their great contribution to the preservation of Moscow's cultural heritage.